A watermelon! A few Moon and Stars variety are on the vine loving this heat. I’ve harvested and enjoyed one so far.

Its been a busy summer and I’ve not been as good about keeping this personal blog up as I’ve been doing a lot for the other blog – agrowingseason – but among many updates due, here is one on my garden.

For starters, its a jungle out there. High temperatures and low rain in late June and early July followed by a massive derecho storm with high winds were pretty harsh on my green friends, with my Scarlet Runner beans being a casualty, drying up and dying, and my Kentucky wonder beans barely producing. Both had good starts, climbing up their tee pee trellises, with the Scarlets producing beautiful coral red flowers early on that the bees loved. But the high temperatures combined with my erratic watering didn’t do them any favors.

A few of the potatoes I dug up. Dirty feet come with this activity.

On a positive note, my potatoes produced and produced. I dug them up three weeks ago and they yielded beautiful finger potatoes just like their original seed ones that I had gotten at a local grocery. The red skinned grocery store bag potatoes and the Kennebunks that my aunt gave me also produced. I have been enjoying these in potato salads, including tiny little round potatoes the size of cherry tomatoes, that have been tender and wonderful.

I have another large box mound of potatoes yet to dig up. I am not sure where I’m going to put them all and am considering doing a root pit in my plot, an underground hole you dig and store your root vegetables in. More on that saga later.

And now to the tomatoes. The plants I nourished and coddled so carefully from seed to seedling  have become a tomato forest. They survived the high temperatures but have gotten woody and brown in many places. (Again probably from erratic care by moi.)  However, for all my bonanza of seedlings of Sungold Cherry tomatoes, I’ve been gathering in lots of their lovely, tasty yellow orbs, which were first to produce. So tangy and delicious. Still my favorite cherry and glad I  put so much into them.

And yesterday, after ignoring my poor plot for two weeks, I went out and was amazed by the bonanza of tomatoes in my tomato forest. The Old Virginia tomatoes had produced, with medium sized sturdy little guys. The random assortment of other plants had as well – a few beautiful yellow ones from my Old German plant, one from my Cherokee Purple, and a few from the Brandywine. Its such a tangled mess in there its hard to determine who was from what. And my volunteer mystery tomato plants that came up in another row did very well, producing some smaller round tomatoes. 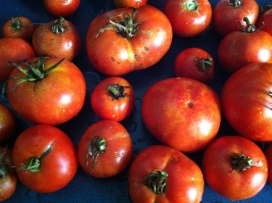 My treasured tomatoes – warts and all

The characteristic of my tomatoes are that they are not very pretty – many of the Old Virginias are a bit ‘sunburned’ with rough patches on their shoulders, some are cracked, and a few have blossom end rot, a disease which has a black round spot on the bottom of each. These are particularly heartbreaking, as you reach for what you see as a beautiful red beauty and once you pick it and turn it over, you see that the bottom is covered by black round rotting splotch. Ugh.

However, I’ve decided that all tomatoes are worthy, despite their circumstances of birth and that all should get a shot at the big leagues of ending up in my salsa, bacon lettuce and tomato sandwich or in a canning jar for next winter.

I picked all of them, leaving only the most yucky and rotten on the garden bed to reseed for next year.  Once I got them home I washed and sorted, saying goodbye to another few too mushy to salvage. The rest, the star characters, are on my counter top, waiting for their debut. A few with the worst spots are in quarantine, and will be cut in half to taste their delicious other half.

Today I will can many of these, and I’m proud that I’ll be eating something I raised next winter or in the next week.  I think for me its the raising, not the eating that is so fun. But I must follow through and get these friends to their final destiny: my table!

The candidates for canning on my counter top

a quote of the moment

"People who say it cannot be done should not interrupt those who are doing it." - George Bernard Shaw